You may not believe this but I was recently involved in a long internal discussion about how buttons should be counted on a keyfob.  This is not as silly as it may sound.

Want to take a quick test?  Without looking below, guess what all of the button functions are on this 8-button AUTOPAGE remote. 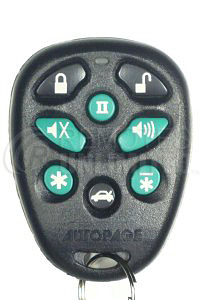 Within the industry, people routinely refer to remotes based on their button count and button functions. For instance, someone recently offered us a stock of the “5-button Ford ‘Hatchback’ remote”.   They were referring to Ford part number 2L7Z-15K601-BA, which was used on SUVs for a few years and has button icons with the words “Liftgate” and “Rear Glass” and well as lock, unlock and panic buttons.  Of course, we knew exactly what they were talking about, but a consumer could never buy a remote based on their description.

Our internal discussion was prompted because many newer keyfobs have more and more “controls” on them.  To complicate things, some remotes have buttons on the side or back of the remote, making it hard to depict how many buttons there really are in a single image.  We know of one aftermarket alarm LCD remote that has 7 buttons overall, but only two on the front.

The most common buttons are those that operate remote functions related to the vehicle.  (In the old days, those were the only kind of buttons on a keyfob and counting them was straightforward.)  But there are also buttons that control functions on the remote itself — such as clock functions on an LCD remote or a “Shift” button on certain aftermarket alarm systems that allows one remote to operate systems on two separate vehicles.  An older version of one Ford remote had a slide switch on the back to turn operation of the seat memory function on and off.  And switchblade and proximity (“smart key”) remotes usually have a button to release the integral key blade.

Remotes Unlimited has adopted the policy of counting all of these as buttons in our part descriptions.  These “buttons” may not operate any function on the vehicle, and they may slide inside of push in, but they look like a button and they do perform a function on the remote, so we count them as buttons.

Because of these kinds of ambiguities, we think you should never buy a replacement remote based on the button count (or brand) in the description.  Unless the part is specified by the OE part number, FCC ID number, or the make-model-year of the vehicle for factory keyless entry remotes, we recommend you use the button count as just one more piece of useful-but-not-definitive information.

Want the answers to the test?  The AUTOPAGE remote functions are Lock – Unlock – Shift (II) – Silent – Panic – Remote Start On (*) – Trunk – Remote Start Off.  If you got them all correct and you would like a job in the industry, send us a comment.